MEET THE NEW OWNERS OF CLOZETIVITY OF CENTRAL TEXAS28 March 2022Next 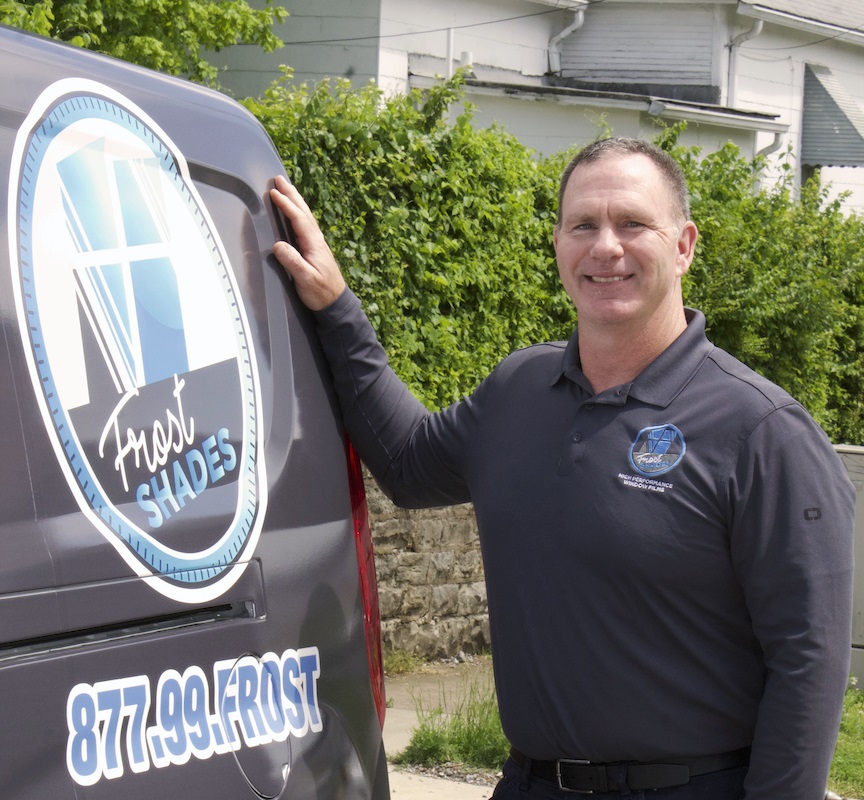 Longtime sales and management professional finds the right fit in this affordable, scalable business opportunity that can grow over time

Like a lot of people, the pandemic months got Bob Lunt thinking about making a career change. After a successful career in the material handling industry, he knew what he wanted to take from the corporate world — and what he wanted to leave behind. He’s been putting his expertise to work since May 2021 in his Frost Shades franchise territory that stretches across upstate South Carolina and is eager to see what the future will bring. At the end of 2021, he was number 2 in the Frost Shades system and is well on his way to building a multi-truck service business.

What were you doing before you decided to become a Frost Shades window tinting franchise owner?

I have been a Southeast regional manager in the materials-handling industry. Because of travel restrictions, I really haven’t been able to do my job because you can’t really do much of a sales and management job if you can’t go anywhere! I’ve also worked in the building products industry.

Why move toward starting your own business now?

I had been thinking about it for a while, and COVID really pushed me along. I had been a vice president of a forklift dealership in south Florida and had just landed that dream job a couple of months before the pandemic hit. You know when people say something is ‘too good to be true?’ That was me, because when farmers, cruise ships and others stopped renting forklifts, the business had to scale back and they didn’t need me anymore.

I connected with a broker and began looking at many different options. There were some other factors involved: My wife had begun a job near Clemson [University] and was living in a rental house. I had a rental house in Florida, and we had the house we owned back in Ohio. And we have children in school, so it was all a bit of a mess in terms of our living situation. So I went back to Ohio, did some repairs on that house and sold it, and moved down to South Carolina into the house we had here and began really considering my options.

How did you settle on Frost Shades Window Films?

I looked at a few franchises and was close to making a purchase twice, including once with a competitor to Frost Shades. Then this brand came up, and I liked a lot of what I was seeing. It’s scalable, and it has fairly good profit margins. And best of all, no one has called in the middle of the night because I didn’t get the window film on their house!

I purchased multiple territories covering the upstate of South Carolina, which is about 1.5 million people. I range across the upper third of the state, stopping at the North Carolina border, and then down a bit toward Columbia.

It’s a big territory, but that’s the scalable part for me. I have the Greenville-Spartanburg area, where I’m hoping to get three vans running. I just purchased my second one, which was a bit earlier than I had planned, but it became available so I moved on that a few months ahead of schedule. I’ve also added a second installer, so now I have actual employees. The geography of this territory is a challenge, so eventually I’ll need to add someone in Spartanburg because I live in Seneca, so it’s a 90-minute drive for me to get to appointments. I know there’s enough business to get to three vans, now I’m just working on getting enough jobs to make that happen.

How are the Frost Shades window film products going over in your area?

I’ve done over 50 jobs so far, and the interaction with the customers has been very positive. They all really seem to like the product once it goes up. People don’t always know what to expect, just that they have issues, but once they see the film installed, they are very pleased.

There is a tremendous need for window films – they steeply reduce energy usage in a home or business and solve some annoying problems like UV fading, lack of privacy and excessive heat. For not a lot of money, a homeowner can save almost a third of their power bill and get a $500 tax credit for adding energy-efficient home upgrades.

How are you advertising the business?

I have done a lot on Home Advisor, Facebook and have an Adwords campaign going. I’ve joined the BNI for network referrals, and did our first trade show, a home and garden show, in Spartanburg in late October. I’m spending a fair amount on marketing, but I know it will pay off. I’m told that if you search for window film, window tinting, either for residential or commercial, in this area we’re the No. 1 listing that comes up. I see it as building leads, as well as awareness, so it’s worth the overhead.

Are you operating from a storefront?

Right now, I do not have an office, and frankly that’s what makes this business attractive, you don’t need one. This is a field-based business, and I really like that. When I get to three or more vans I may need some kind of small warehouse to start sending materials to and from, though.

What would you tell someone who called as they did their due diligence before buying a Frost Shades franchise?

I actually have talked to some people; one was a friend from high school who was looking at it. I tell them that this is a needed service, especially in the South. When I drive into a neighborhood to do a job, I see closed blinds everywhere. People are just baking in the sun. It’s also a scalable business with good profit margins and relatively low stress. The product does what it’s advertised to do — it really performs. For me, that has been a great thing.

It can be challenging to build up to the amount of work you need to be doing at first. You need to have very clear goals and a timeline. I’d also say when you are looking at territories, look at what’s nearby, so you can plan for growth. I have the right of first refusal on other territories in North Carolina and South Carolina right now, for instance, and I would love to grow down to Columbia or up in Charlotte. Or the coast — any coast is going to have sun issues. And people are catching on to what this kind of product can do for them. They like the energy savings, and they like the tax savings, depending on where they live.

Lastly, if the person is worried about having to sell, I would tell them that as someone who has been in sales a long time this is one of the easiest closes I’ve ever had. People see the product and what it can do, and the more they learn the more they are inclined to buy it.

CLOZETIVITY FRANCHISE EXPANDS TO MULTIPLE LOCATIONS IN THE UPSTATE NY